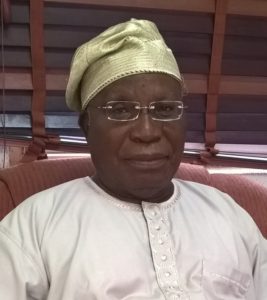 Engr. Oshinowo was born into the family of Elder and Madam Oshinowo of Ikorodu Local Government on 29th October, 1945

He had is primary school education at Tinubu Methodist School, Lagos and later proceeded to Remo Secondary School, Sagamu in Ogun State for his Secondary School Leaving Certificate. He obtained Higher School Certificate at the CMS Grammar School, Bariga, Lagos. He graduated with a B. Sc. Honors in Engineering from the prestigious University of Lagos, Akoka, Yaba – Lagos in 1969.

He is a Chartered Engineer, a Fellow of the Nigerian Institute of Engineering and also a Member of Society of Civil Engineers in United Kingdom. He worked with the Lagos State Ministry of Works and Planning as one of the pioneer Engineers between 1969 and 1971. He resigned from the Ministry of Works and Planning and joined the Lagos State Development and Property Cooperation (LSDPC) till October, 1981 where he resigned to form a contracting and consulting companies.

In January 2011, Engineer Oshinowo resigned from these Companies when he was appointed as Honorable Commissioner IV of the Lagos State Civil Service Commission, representing Ikorodu Division of Lagos State. As a result of his contribution to the development of the State he was given another opportunity to serve as Commissioner III at the expiration of his First tenure in February, 2016 by His Excellency, Governor Akinwunmi Ambode.