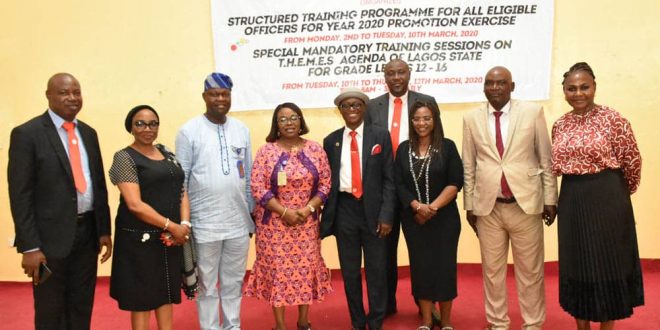 The Chairman of Lagos State Civil Service Commission, Mrs. Olubunmi Fabamwo has disclosed that the State’s workforce is currently being exposed to critical success skills needed for the 21st-century public service to drive the economy of Lagos.

Fabamwo, who stated this at the closing of the 10-day special  Structured Training Programme, STP, organised for civil servants eligible for Y2020 Promotion Exercise, revealed that the training was not only meant to prepare the participants for promotion but to also deepen public policy capabilities across critical sectors of the Service.

She added that the STP, as designed, exposes participants to the competencies required for result-oriented public service outcomes based on individual roles, noting that the process involved over 4,000 civil servants who have been undergoing Structured Training Programme, STP, in the last ten days.

In her words, “The STP is characterised by the acquisition of knowledge and understanding of the expectations of the State government from its employees”.

According to Fabamwo, an innovation was introduced this year to the annual STP which is additional one-day training that emphasises the correlation between the State’s T.H.E.M.E.S agenda and the global Sustainable Development Goals (SDG).

The Chairman averred that the comparison between the T.H.E.M.E.S Agenda and the global development goals is with the view of giving Lagos State Civil Servants a global perspective of their local roles and engender deep understanding.

In her words, “This is a very important period in Lagos State Public Service as over 25,000 public servants across the Scheduled Commissions and Boards are being evaluated and prepared for higher responsibilities and roles as it relates to the agenda of the State Government”.

Speaking on behalf of other members of the Civil Service Commission and the Permanent Secretary who supervised the training at different venues, Commissioner I, Mr. Adesina Odeyemi, commended the participants and charged them to justify the investment of the State Government in their capacity training and welfare.

Odeyemi said the exercise was designed to acquaint participants with the key six pillars of the T.H.E.M.E.S Agenda, maintaining that civil servants have a pivotal role to play in achieving the vision of government in all sectors that are classified under the policy which drives activities of the current administration.

Commissioner 1 assured participants that the administration will continue to recognise and reward outstanding performance.